“My life has been old ships and new forests.” 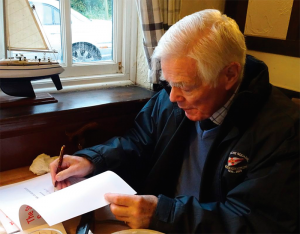 Maldwin Drummond OBE, was a High Sheriff of Hampshire, a New Forest Verderer for 28 years, Commodore of the Royal Yacht Squadron, champion of sail training, conservationist, and author of more than twelve books. He died in February 2017 after a short illness. His last book was the charming (and historically factual) children’s book, The Strange History of Seagulls, published by Little Knoll Press. The stories and paintings are all Maldwin’s and it is the book that he said he most enjoyed creating.

Maldwin lived all his life in the Waterside, the part of Hampshire he described as ‘where the Forest meets the sea’. He cared passionately about the landscape, history and nature of the New Forest and the Solent, and had a keen interest in sailing, old sailing ships and the welfare of the oceans. He was awarded the OBE for public service and services to conservation.