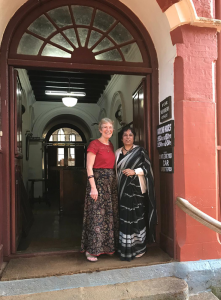 Jenny Knowles with Kamala Ramchand on the steps of the Nilgiri Library. The link with Kamala to the book Cor Blimey! Where ’ave you come from? written by Jenny’s mother Winifred Tovey seemed very fitting as Winnie’s best friend was also called Kamala.

It was the serendipity of social media which put me in touch with artist and author, Saaz Aggarwal, and through her, with Kamala Ramchand of the Nilgiri Library Book Club, Ooty (also called Udhagamandalam). 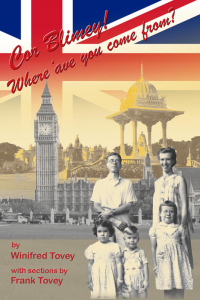 I felt greatly honoured to be asked to meet with the Book Club members and present to the library a copy of my mother’s book, Cor Blimey! Where ’ave you come from?

In the book my mother, Winifred Tovey, wrote about our lives in India from 1951 to 1967. Dad’s work as a medical missionary at Holdsworth Memorial Hospital, Mysore, connected us with many places and people, from palaces to village huts, and from maharajas to beggars.

My siblings and I went to school in the Nilgiris, bringing mixed memories, the best of holidays that my mother wrote about: 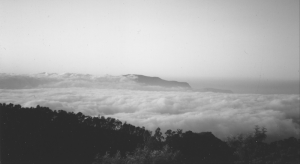 ‘Carrington was unique. The bungalow perched on the side of a small hill within a huge valley. The ground fell away quite steeply from the front aspect, giving a magnificent view overlooking the tea plantation. Deep down on the opposite slope nestled the tea factory. More mountains rose and fell all around. In the far distance we could just glimpse the plain, six thousand feet below. Beyond the plains stood the Anamali range of hills. Often, on waking in the early morning, we would rush outside in our pyjamas just to witness the glorious sight of the sun rising over on our left. Below us would be a vast expanse of billowing white clouds, punctured by one or two dark blue mountain peaks.

We watched in silence while the sky gradually changed from pale grey to blue and the clouds from white to a pearly grey, then to cream, until finally, the fiery orange-red ball of sun appeared, huge and glowing above the cloud mass. As the heat from the sun warmed the air, the clouds slowly began to rise. First we could see the bright sky above the clouds, then as the clouds levelled within our line of vision the sun was obliterated and below we had a clear view of the plains – truly breathtaking and never to be forgotten!’ 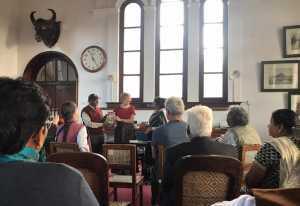 This is a familiar experience for the book club members, who often wake up above the clouds … or in the clouds, and once the sun breaks through are struck again by the beauty of their landscape.

It was  wonderful to share with them experiences of life in India and in particular the Nilgiris. 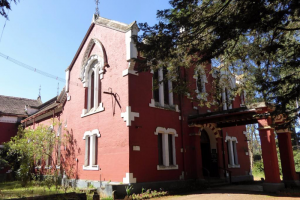 The Nilgiri Library is 161 years old. 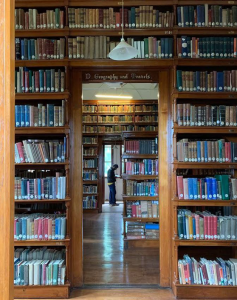 Kamala Ramchand describes it in nilgirishistory.weebly.com as ‘housing more than 40,000 books, holding more treasures than all the pirate’s loot on Treasure Island, where one can spend two lifetimes …’ 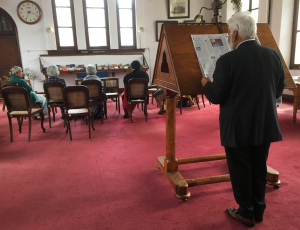 Fredrick Price in his book Ootacamund: A History writes that ‘Mr. Sullivan, founder of the Nilgiris, breathed life into the concept of a library in 1829: A subscription has been set on foot for a public reading room at Ooty.’

1829 was also the year when the foundation stone for St Stephen’s Church, Ooty, was laid. It seems incredible that a wild mountainous region, only sparsely inhabited by indigenous tribal peoples became a town big enough to warrant a large church and a library in ten short years.

The Nilgiris rise up from the plain.

Although the East India company took possession of the Nilgiris after the defeat of Tipu Sultan in 1799, the mountains had not been visited by any Englishman until 1818, when two sportsmen on shikari (big game hunting) accidentally discovered ‘the coolness of the ambience in the Nilgiris.’

In 1819, John Sullivan, District Collector, Madras, noted above as ‘founder of the Nilgiris’, built the first house in Ootacamund. With great speed the East India Company established the town as a sanatorium for Europeans away from the stifling heat of the plains.

Up to this time, sick and ailing Company employees and their relatives had been sent by ship all the way to the Cape, Africa. Missionaries had no recourse unless their missions brought them home. It must have been exciting to discover a much more accessible place in the hills with a climate similar to an English summer.

For more on the authors and books mentioned in this post try these links: