Cor Blimey Where ave you come from | Kindle eBook

eBook Kindle Version – click on image to buy from Amazon 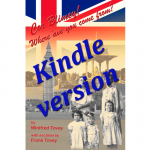 We spent eighteen months in China just after World War II and had to flee from Mao’s Red Army; an experience that we have written about in our book Strangers in Chaotung.  Then, after a brief stay in England, we got back on a passenger ship to travel to post-Raj India.

For sixteen years we lived and worked in Mysore.  Our four children grew up to mix with the very rich and very poor; one day at nursery school in the Maharaja’s Palace, and on the next going with me to visit remote villages, where the last few miles could only be travelled on foot and we would meet the villagers under the shade of a banyan tree.

When we first arrived in India in 1951, the old ‘mission hands’ instructed us to, ‘listen, learn and on no account express an opinion’.  But we found too much need around us.  In no time at all we were involved in extending Frank’s work as a surgeon at the Holdsworth Memorial Hospital to projects in the outlying areas.

The advent of ‘Dapsone’ (in 1950) as an effective treatment for leprosy made it possible for our team to rehabilitate leprosy sufferers and practically eradicate leprosy from local districts.  With help at home from an ayah, cook and mali, I was able to take on other projects as well, bringing bore wells and cottage industries to drought-stricken villages that had previously suffered regular famines, and assisting in the resettlement of Tibetan refugees in nearby Bylakuppe.

Now, both in our nineties, we look back on the huge changes that have taken place in our lifetime and we are glad to have been involved in events that shaped the India of today.
This book is also available in Kindle and e-book formats on this site.